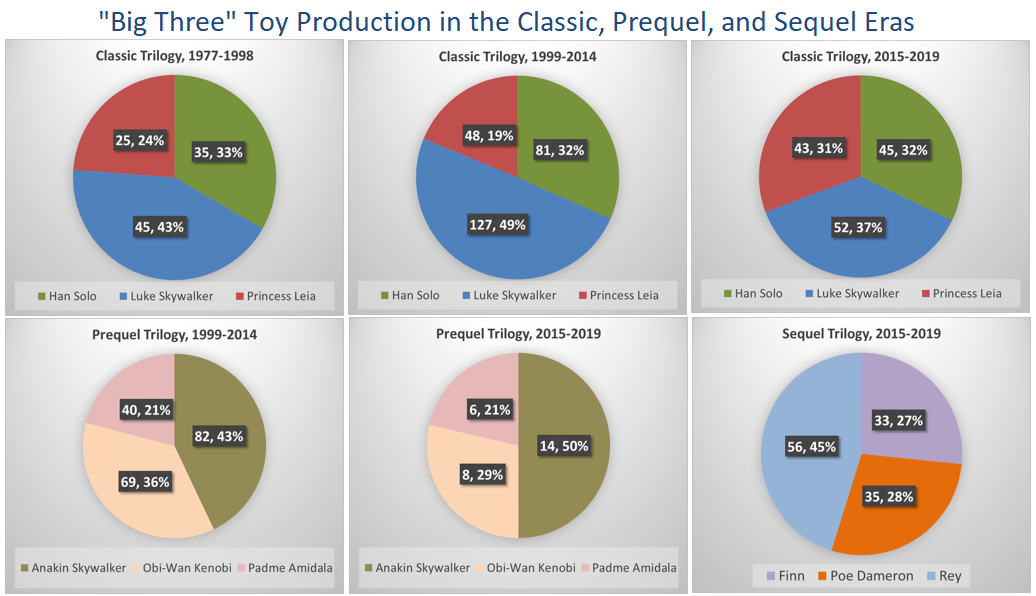 The Star Wars brand has been criticized in the past for giving short shrift to its female characters, at least in terms of how things look on the shelves.  I was curious whether that was a fair critique, and how things have changed over time.  The above pie charts mines the Happy Beeps Toy Catalog to collect the production info from Kenner, Hasbro, Disney, Lego, Mattel, Hallmark, and Funko, and show the number of toys produced for each character in a respective trilogy's "Big Three".  It's only showing the toys for those characters in likenesses from their own starring roles, so no General Leia toys, no original trilogy Darth Vader, no Alec Guiness Obi-Wans...also no Clone Wars or other expanded universe toys.

For the Classic Trilogy, between 1977 and 1998 Princess Leia represented about 25% of the Big Three toys produced.  Classic trilogy characters were stil produced once the prequels got going in 1999, but between the release of The Phantom Menace and 2019, Luke really took over and squeezed both Leia and Han down to smaller shares.  By the time the Disney era really got going in 2015 though, things had evened out significantly...Leia, Luke, and Han get a roughly equal amount of attention.

The saddest part of this story most definitely belongs to Padme (life imitating art?).  Between 1999 and 2014, notwithstanding the most costume diversity of any character in any Star Wars era (and certainly the most consequential story in at least one of the prequel movies), the young Queen and Senator received only 21% of the toy production in both the prequel era and the modern era.  If you can believe it, since 2015 Padme has only been produced as an action figure once - we're getting a new six-inch figure later this year, and the rest of the modern era toy production has been plush toys from Disney and Hallmark.  Maybe with the 20th anniversary of The Phantom Menace this year we'll see some of that change.

Finally we arrive at sequel characters in the modern era...and fittingly, Rey sits squarely atop the pack with 56% of all the toys produced for the three sequel trilogy leads.  Rey is the best thing to happen to Star Wars in decades...I recall in the run-up to The Force Awakens there was a concern that the licensees weren't giving Rey enough attention as far as production was concerned...at the time I was convinced that the reason for that was J.J. Abrams trying to head-fake everyone in the marketing campaign that Finn was actually the lead (remember when he was the only one who held the lightsaber?) - but it's nice to see that whatever issues there were have been course corrected.

That's all for today folks - contact us with any feedback!