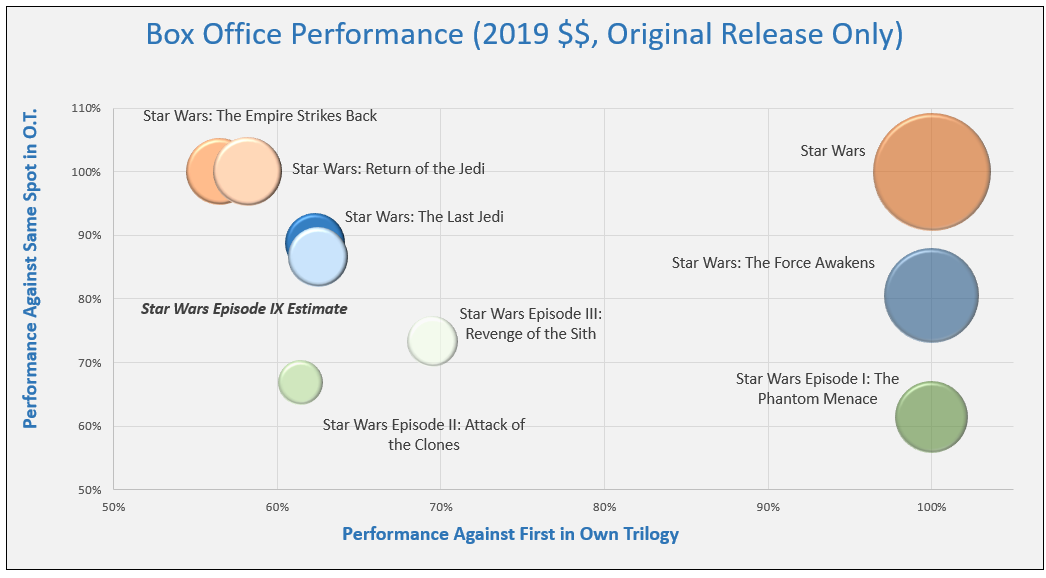 How much will Episode IX earn at the Box Office?

Principal photography for Star Wars Episode IX has wrapped, and by all accounts the Skywalker Saga as we know it will come to an end this December.  Maybe the least important question of all is how much money will Episode IX make at the Box Office...but without a title or a trailer, what else is there to speculate about?  Thanks to the good people at Box Office Mojo, at least we've got a decent place to start.

There are two frames of reference.for how a Star Wars movie will perform.  One - the first movie in any trilogy always makes the most money, and provides a barometer for how well the others in the same trilogy will do.  Second, the Original Trilogy taken as a whole did better than anything since (chalk it up to quality, novelty, and WAY less competition).  So as far as Episode IX goes, we can take two calculations...first, as one of three third films in a trilogy, how well did Return of the Jedi and Revenge of Sith do against Star Wars and The Phantom Menace, respectively?   And second, as the conclusion of the Sequel trilogy, how well did the The Force Awakens and The Last Jedi do against their original triliogy counterparts, Star Wars and The Empire Strikes Back?  Combine the averages of these two metrics as applied to the third movie IN the Sequel trilogy, and we get our best estimate for the domestic box office performance of Star Wars Episode IX.

The bubble chart pictured here combines the two performance metrics described above for every Skywalker-Saga Star Wars movie released so far, and plots the values on the X and Y axis (with the size of the bubble being relative performance in box office dollars adjusted for ticket price inflation).  Based on the numbers available, if I were taking bets on the Episode IX box office take, the over/under would be at $612,686,643 (oddly enough, just about the same as Star Wars: The Last Jedi).

We've got several months left...any other ideas on how to guestimate the box office whilst we pass the time?  Contact us and let us know!