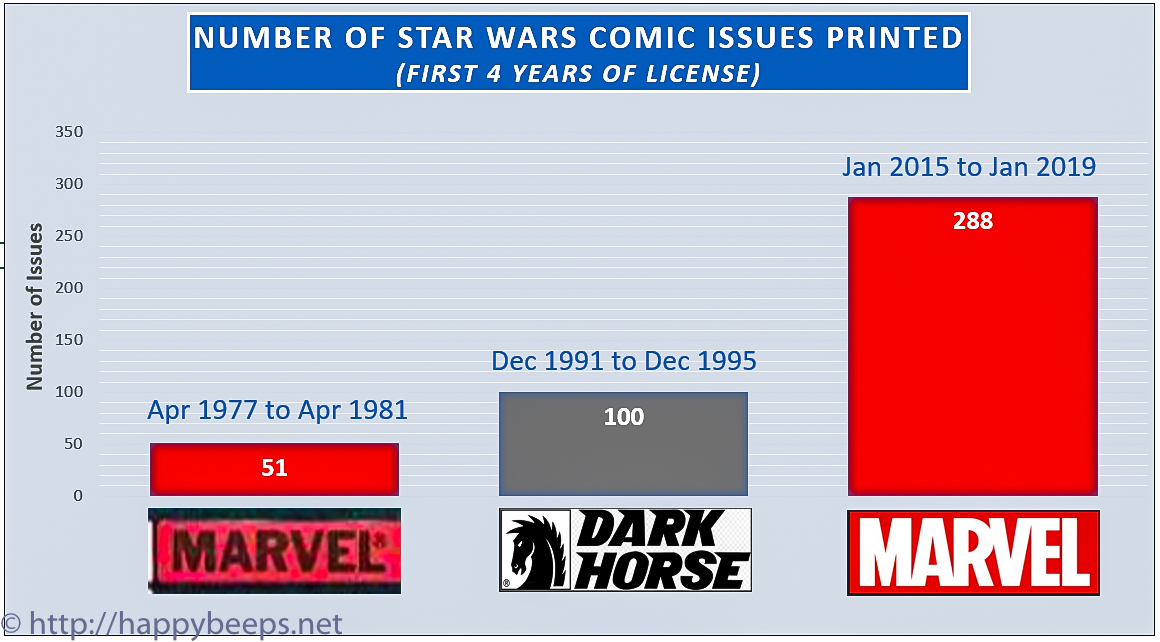 Last month marked four years since Marvel Comics took over the license to produce Star Wars comics from Dark Horse, who held the license between 1991 and late 2014.  Of course prior to 1991, the license had been owned by Marvel before...in fact apocrypha has it that Star Wars comics produced beginning in 1977 all the way through 1986 are credited with saving the company from bankrupt.  So you're welcome Robert Downey Jr!.

To get a sense of how the scale of comic books production and consumption has changed over the past 40 years, check out what the first four years of the current Marvel run looks like as compared to the first four years of the original Marvel license, as well as the relaunch of Star Wars comics under Dark Horse in 1991.  In 1977, Marvel's Star Wars comic line was limited to a single series (although they would later add kids' titles under their Star Comics label for Droids and Ewoks), with 51 issues published in the first four years.  Dark Horse just about doubled the production of Marvel in its first four years, with titles like Dark Empire, Tales of the Jedi, and X-Wing: Rogue Squadron - and they entered the late 90's Special Edition and Prequel era with great momentum...nearly half of those first 100 comics were released in 1995 alone.  But that's nothing compared to the pace of Marvel's new run...nearly three times as many comics released since January 2015 as Dark Horse had between 1991 and 1995, and nearly six times as many as the original Marvel run over its first four years!  If you want to know why your wallet is hurting, this is why :).

And before you ask - no, this does NOT include reprints and variant covers.  Star Wars #1 in January 2015 alone was released with 100 cover variants; these days, the average number of variants per new comic is between two and three.  Something must be working, because they keep doing it!

Let us know what other insights you'd like to see!