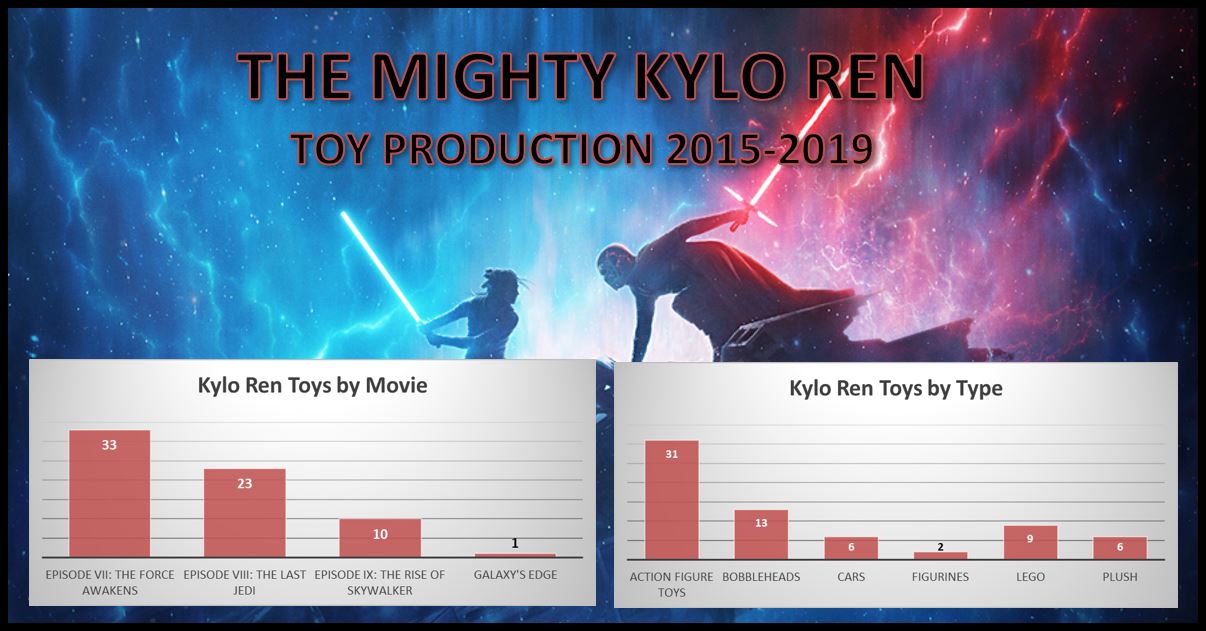 Enjoy some statistics on toy production for Kylo Ren from Hasbro, Disney, Lego, Mattel, Hallmark, and Funko...and if you want to see how close your collection is to complete, check out Kylo Ren on our all new Character Pages, right here!  Also, as a special treat, here's an excerpt / sneak peek of the Happy Beeps review for The Last Jedi...all Star Wars rewatch reviews will be posted prior to The Rise Of Skywalker, so stay tuned!!

Rian Johnson did something truly elegant and beautiful with the Last Jedi. Instead of picking up all those strings of the past that JJ Abrams set up in The Force Awakens - Who is Snoke?  How did Maz get Luke's lightsaber?  Who are Rey's parents? - he’s instead made a movie about how to let go and cut free of the constraints those strings can put on us. Rey and Kylo Ren are, as ever, two sides of the same coin here – both of them are in search of legends they think will save them, and in The Last Jedi, those legends around which they’ve defined themselves have let them down. For Rey, instead of a powerful and resolute Jedi master to train her and give her purpose, she finds only an old man broken by years of heartache and loss. For Kylo, instead of a clear path to destiny and power, he finds only confusion, and manipulation. Rey responds by embracing hope, and seeking reconciliation. Kylo Ren responds with contempt, and destruction. One ends the story bruised but in the company of family. The other ends alone.

This is so incredibly powerful, and important. The world around us is broken, in more ways than we can count. Our paths are not clear. Where are we going to go for help? To church? To school? To history? To the Constitution and the wisdom of the founding fathers? To entertainment, or to the news? Choose whatever sacred texts you want, and accept that of course you will find wisdom there, if you look hard enough. But The Last Jedi above all cautions us not to idolize those texts, those legends. Yoda comes back (Yoda comes back!) to give Luke one final lesson…to let go of grand traditions and ancient destinies not in bitterness, but in hope, and recognize that thousands of years of accumulated wisdom is only as good as that which can be found in a single, pure, human heart of good will.  Nourish that, as with Rey, and you can literally save the world.  Treat it carelessly, as it seems our heroes did with Ben Solo, and you risk ruin.

Oh and yes, the sacred texts are not to be idolized, but let me just remind you…Rey herself kept those books. The point isn’t that there’s no value in tradition - it’s that if you want to heal a broken world, look not to titans, kings, popes, or presidents. Look instead to an orphan boy sweeping a stable. Look to your own heart - that’s where the revolution will come from. “We have everything we need.”