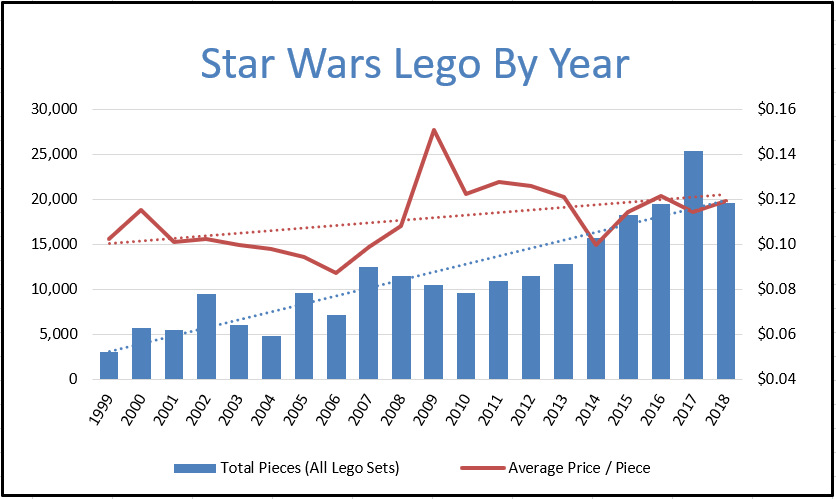 We love Lego Star Wars in the Happy Beeps house...and if you're like us, you wonder - how much would it cost each year to own it all??  Happy Beeps Chart of the Day is here to help.  This chart adds up the total number of lego pieces released in every single Lego Star Wars set each year since the line began in 1999...and divides that into the total cost for all sets to arrive at an average price per piece.  Average price per piece can be a little misleading, since a set can be more expensive or less expensive relative to its size as a result of the complexity of the build.  But even allowing for that, you can see that starting in the post-prequel era, Lego has increased the price of it's average Lego piece from hovering around $0.10 to hovering around $0.12 - about a 20% increase!

There are two blips in the trend here.  The first one is in 2009, where the price per piece jumps to over $0.15 - this is due only to a couple of collectible exclusive minifigs released at conventions, at inflated prices.  This experiment seems (mercifully) to have ended there.  The second blip was in 2014, when the price dipped back down to around $0.10 for one year before bouncing back.  But notice what happens in the same year...we have the biggest one-year jump in total pieces produced, from 12,837 to 15,684...a 22% increase in just one year!  My theory on this is that Disney was just hitting its stride post-acquisition of Lucasfilm in 2014...production was ramping up, and they wanted to make sure the brand was still going to be successful with more sets coming out.  By 2015 their confidence was high, so they went back to the average $0.12 per piece.

So - to get back to our original question, if you were a Lego collector in 2018, with an average price point of around $0.12 and a total piece count of 19.569, it would have cost you around $2,348 to stay up to date with the entire line.  Check out the Happy Beeps Toy Catalog to find out what you'd have gotten for it!

You might also be wondering about that huge peak in production in 2017.  That's not likely to be repeated, as it's thanks to the largest Lego Star Wars set ever produced - the amazing Millennium Falcon 75192, which comes in at over 7,500 pieces and retailing at $799.00.  Pricey - but an amazing build.  Find a picture of it here in our gallery of the Happy Beeps Museum!